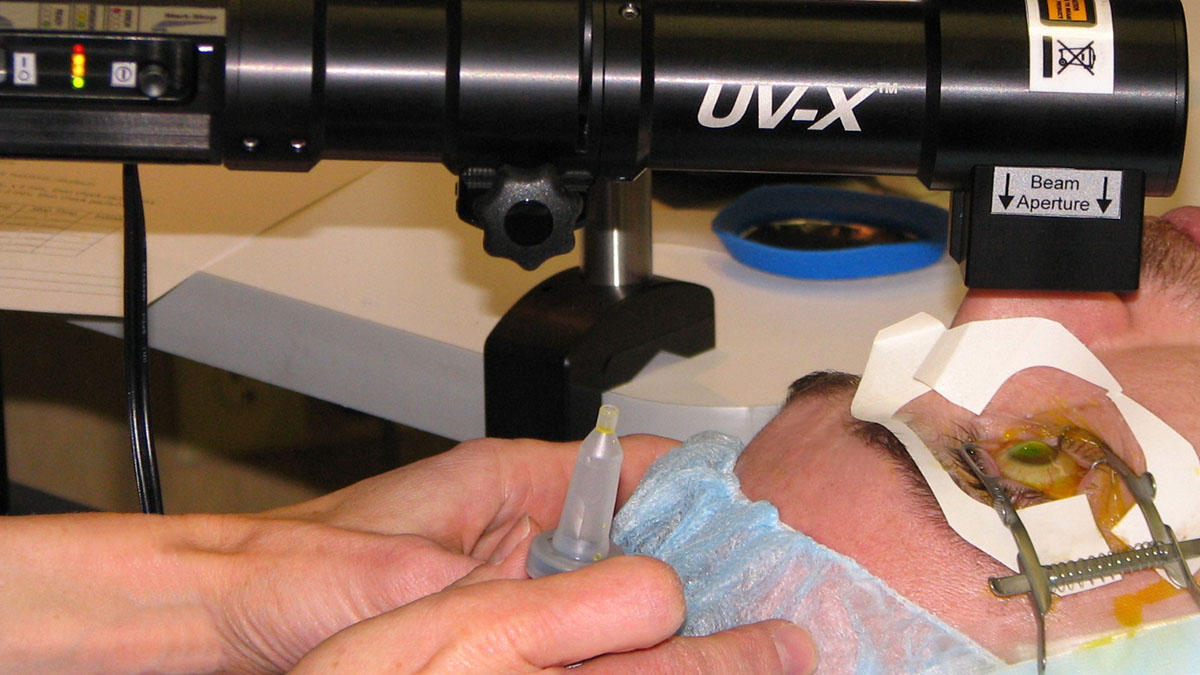 Corneal collagen cross-linking is a technique which uses UV light and a photosensitizer to strengthen chemical bonds in the cornea. The goal of the treatment is to halt progressive and irregular changes in corneal shape known as ectasia. These ectatic changes are typically marked by corneal thinning and an increase in the anterior and/or posterior curvatures of the cornea, and often lead to high levels of myopia and astigmatism. The most common form of ectasia iskeratoconus and less often ectasia is seen after laser vision correction such as LASIK.

Keratoconus is a degenerative disorder of the eye in which structural changes within the cornea cause it to thin and change to a more conical shape than its normal gradual curve.

Keratoconus can cause substantial distortion of vision, with multiple images, streaking and sensitivity to light all often reported by the patient. It is typically diagnosed in the patient’s adolescent years. If afflicting both eyes, the deterioration in vision can affect the patient’s ability to drive a car or read normal print

Cross-linking of collagen refers to the ability of collagen fibrils to form strong chemical bonds with adjacent fibrils. In the cornea, collagen cross-linking occurs naturally with aging due to an oxidative deamination reaction that takes place within the end chains of the collagen. It has been hypothesized that this natural cross-linkage of collagen explains why keratoectasia (corneal ectasia) often progresses most rapidly in adolescence or early adulthood but tends to stabilize in patients after middle-age.

In addition to the cross-linking that occurs commonly with corneal maturation, there are several other pathways that can lead to crosslinkage. Glycation refers to a reaction seen predominantly in diabetics that can lead to the formation of additional bonds between collagen. In the pathway most relevant to this topic, oxidation has been shown to be able to trigger corneal crosslinkage through the release of oxygen free radicals.

The primary purpose of crosslinking is to halt the progression of ectasia. Likewise, the best candidate for this therapy is an individual with keratoconus or post-refractive surgery ectasia who has documented progression of the disease. There currently are no definitive criteria for progression, but parameters to consider are change in refraction (including astigmatism), uncorrected visual acuity, best corrected visual acuity, and corneal shape (topography and tomography).

The primary goal of the first stage of therapy is to allow riboflavin to diffuse into the cornea. While there are several variations on the techniques used to accomplish this, all entail either removing or weakening the epithelial barrier of the cornea. In all instances the patient is first given anesthetic drops. Some ophthalmologists will also give preoperative antibiotics. A lid speculum is placed. After disrupting the epithelium, drops of riboflavin 0.1% (vitamin B2) are given at intervals of 1-5 minutes for 15 – 30 minutes, or until riboflavin can been seen in the anterior chamber of the eye by use of the blue filter on slit lamp examination.

After adequate riboflavin absorption, the patient is positioned with the UV light (typically 365-370um) at a small distance (1-5cm) from the corneal apex for 30 minutes.

Following irradiation, drops of antibiotic are given and a bandage contact lens is typically placed. The patient is given antibiotics to use postoperatively 3-4 times daily.

Corneal collagen crosslinking (CXL) was developed in 1998 by Theo Seiler, MD, and has been shown in numerous clinical trials to strengthen the eye’s clear surface (cornea) through the application of riboflavin, a form of vitamin-B2, followed by treatment with ultraviolet A (UV-A) light.

The two basic types of corneal crosslinking are:

Crosslinking with riboflavin and UV-A light has proven to be a first-line treatment for people with eye conditions such as keratoconus, pellucid marginal degeneration and corneal weakness (ectasia) after LASIK.

While crosslinking is used in virtually every country around the world, it is still in the FDA approval process in the United States. Both Avedro and Topcon are working to get their brands of riboflavin drops and UV light sources approved by the FDA. As well, many other single-center and multicenter clinical trials are evaluating CXL in the U.S.

Corneal crosslinking can also be used in combination with other technologies, with the goal of improving the visual results more rapidly. Tiny plastic inserts known as Intacs, which are surgically implanted within the cornea, have been shown to work well with crosslinking. Surface laser vision correction guided by corneal topography has also proven to be a useful technology.

Another technology, currently under development, uses microwave energy to flatten the cornea, and this may one day prove to be effective when combined with crosslinking.

Who are the best Candidate?

Multiple systems for corneal crosslinking have received approval in Europe. Since these systems are widely available there, the goal is to identify patients with corneal ectactic disorders such as keratoconus or pellucid marginal degeneration early in the disease process and treat them before they develop significant vision loss from ectasia.

Once they have received crosslinking, in most cases their corneal shape will either remain stable or actually improve. This can provide patients with improved visual acuity and improved ability to wear contact lenses.

Other potential applications of corneal crosslinking include the treatment of corneal ulcers that are non-responsive to topical antibiotics. Studies have found that the combination of riboflavin plus the UV light can be effective for eradicating a variety of corneal infections.

Some surgeons have also reported reasonable results in improving the stability of the cornea in people who have undergone radial keratotomy, an incisional refractive procedure from the 1980s and 1990s. Crosslinking appears to work best for those who are experiencing daily fluctuations in their vision.

People who are considering vision correction procedures such as LASIK also might eventually be pre-treated with corneal crosslinking to strengthen the eye’s surface before undergoing an excimer laser ablation that reshapes the cornea.

Before, during and After Surgery

During preliminary examinations, your eye doctor will measure the thickness of your cornea and make sure you are a good candidate for the procedure. You also will need to have a routine eye exam to assess your visual acuity and general eye health. And your doctor will perform mapping of your cornea (called corneal topography) to determine the level of your eye condition.

CXL treatment has an extremely low complication rate. The risk of infection is rare as the UVA light kills all bacteria and parasites. In some cases, there is a delay in the healing of the corneal epithelium, which can delay vision correction results; however, this is not permanent. 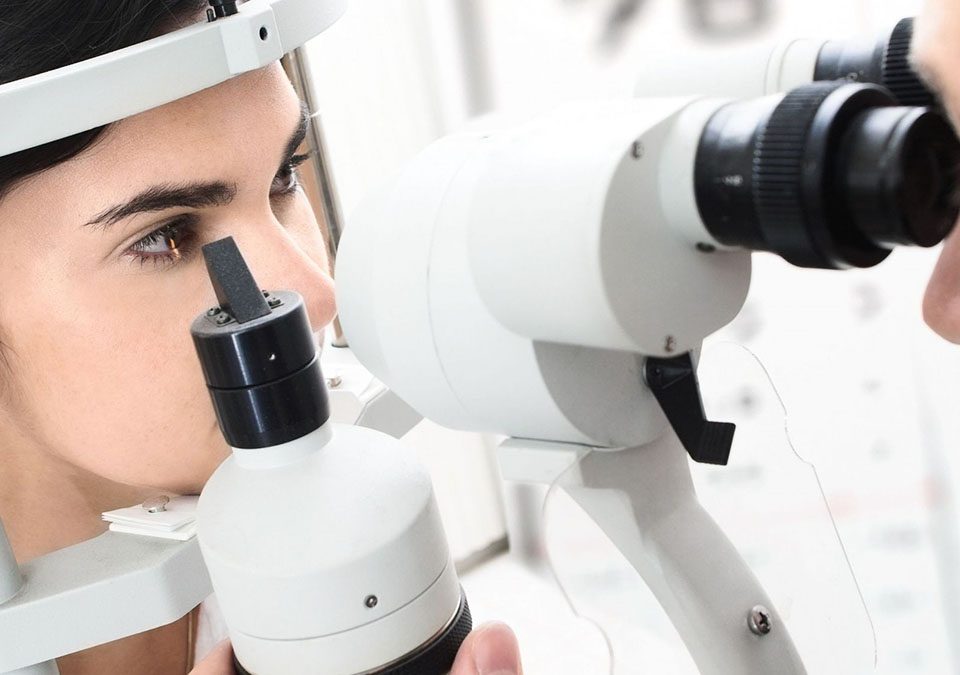 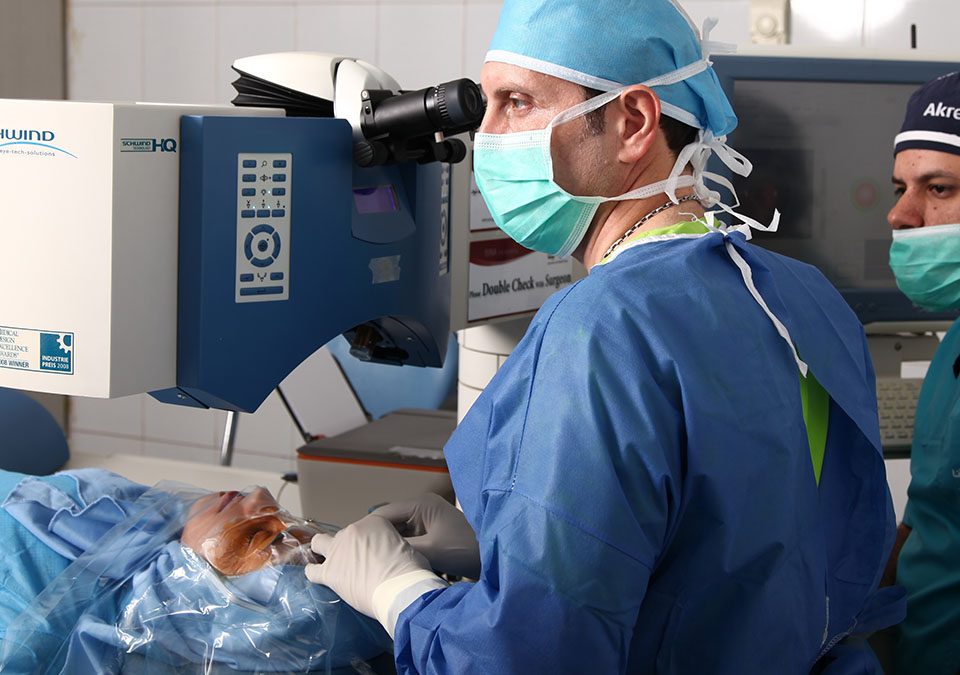